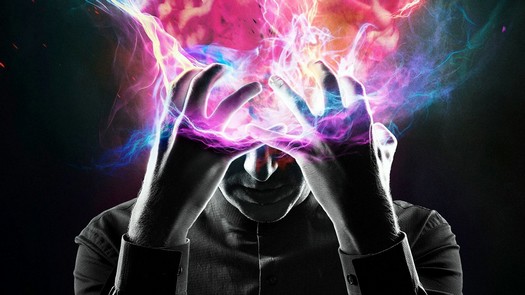 If you follow me on social media, you might already know that I’m completely obsessed with a TV show called Legion, for which the first season aired earlier this year. This past week, I rewatched the whole thing and it made me the happiest girl in the world (this is already a twisted Legion reference, I’m lost to the world). If I only had one show to remember for this year, it would be this one. I’ve been fangirling a lot about Legion, but as I want the whole world to discover it… I needed to write a blog post on the subject, so I could try to convince you to watch it (please).  However, before I really start this post, I would like to warn you that I would put a trigger warning for suicide attempts for the first season of the show. Now that I’ve told you this, let’s get right into it.
What is Legion about?
David Haller was diagnosed with schizophrenia at a young age and has been a patient in various psychiatric hospitals since. After he has an encounter with a fellow psychiatric patient, he is confronted with the possibility that there may be more to him than mental illness.
My thoughts on the show

Every time I watch an episode of Legion, I’m absolutely wonder-struck and my eyes are glued to the screen. For me, it means a lot, because I have trouble watching TV shows/movies and always end up doing something else on the side. When I watch Legion, I can’t do anything else… Up to the next thirty minutes after finishing an episode. This is a show that stays with you while you’re discovering it and even afterwards, because you can’t stop thinking about it, nor can’t stop trying to figure out what exactly is going on.
The most important sentence of the whole show is “is this real?” and it makes so much sense, as during the eight episodes, you will always have doubts, just like the characters. I know that when Stranger Things came out, many viewers developed an addiction of sorts to it, by not being able to stop watching it. That’s what happened to me when I started watching Legion. The show’s creator, Noah Hawley (Fargo), managed to find the right pacing in order for the show not to be too obscure to the viewer, who has no clue what is going on, all the while intending to lead him astray.

Dan Stevens as David Haller and Rachel Keller as Sydney Barrett.
The cinematography of the show is magnificent, with futuristic and retro vibes at the same time. The scenery is stunning and I was gaping at quite a few scenes, because they were so unexpected and yet felt right. I love Marvel and DC Comics and watch a lot of their TV shows, but for me, Legion is stealing the show and I would trade them all for it (yet, I adore them).
Legionis set in the X-Men universe and follows a secondary character you probably never heard of, which gave so many possibilities to the show and is one of the reasons it is such an original and different TV show from others. The characters are far from being the superheroes we know, which makes them so relatable. They are flawed, they have complicated pasts, they mess up and nothing comes easy for them. Some scenes of the show can seem quite… Weird, but the plotlines definitely allow them and it makes the show all the more complex and interesting.
David Haller is an unreliable narrator, so the viewer will never know what’s true and what isn’t until the very end, which is why he will always want to watch more of the show. Legion talks a lot about superpowers and mental illnesses and while it’s a complicated thing to do, the showrunners managed to do that splendidly. Now, some aspects of the show can be very triggering (I’m thinking in particular of suicide attempts scenes, take for example the beginning of the first episode), which is why I can’t say that Legion is for everyone. Nevertheless, I think the team did an amazing job on those topics.

The plot is always moving forward and never has a dull moment, which means you won’t see time passing by, until the end of the episode you’re watching. It might be a shame that the first season is only eight episodes long considering how thrilling it all is (can you believe I have finished my rewatch, but still have to wait until February 2018 for eason 2?), but I might be saying that because I’m obsessed with this show and I really don’t want to wait for so long. In the end, while I’m complaining, it can also be seen as a token of the show’s quality. Besides, the last scene of the season, delivered after the end credits (it’s Marvel, y’all!), is absolutely cruel and a huge cliffhanger.
The actors’ performances are astonishing and I really wish they will get awards for them (
they weren’t nominated for the Emmys, I’m still upset). I adore Dan Stevens, you probably know that by now, and still, his work in Legion left me speechless. The role of David Haller probably is one of his best performances yet, because David never really knows what is true, because the show always go in unexpected directions. The show made him do everything and he did all of them brilliantly. The other shining star of the show is Aubrey Plaza, who has a mysterious and oh so interesting role. When she’s on the screen, you can’t keep her eyes off her, trying to understand what will be next and how she’ll surprise you. She’s so excellent, I really need to watch her in something else than Legion. The other characters are also very good in their roles and I absolutely loved the dynamics between their characters.
Overall, I love Legionwith all my heart and it definitely is my favourite on-going show. It is the best show I saw in 2017 and it means so much to me, which is why I have already rewatched it, when I almost never rewatch anything. It is such an addictive and breathtaking TV show, with very talented actors. I can’t wait to see what’s next for the show!
I really hope I managed to show you what an amazing show Legion is, and if you’re planning to watch it or have already watched it, please let me know, I would love to know your thoughts.
Lots of love,
Lucie