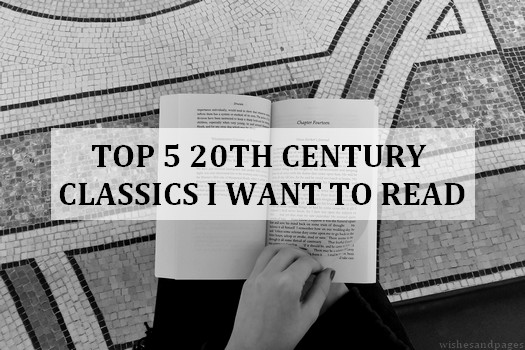 For the last few months, I’ve read a lot of classics and I couldn’t be happier, because I had put them on the side since high school, when I used to adore them. I have noticed that I’m naturally going towards 19th century literature, because that’s the one I’ve always loved, but I would really like to discover more classics by exploring the 20th century. Actually, it will be one of my reading goals for 2018, but we’ll talk about that in a few weeks. Long story short, this is why I made a list of the five 20th century classics I really want to read in the upcoming months, because I know it will motivate me to read them as soon as possible (it worked so much when I last did this in August). If you have any recommendations for 20th century literature that I should read, please let me know!
Howards End by E.M. Forster (1910)
I studied E.M. Forster a little in one of my English classes a few years ago, but have yet to read a book by him. All I know about this one is that it’s about three middle-class families in the Edwardian era and I’m very curious to read more Edwardian authors (as I’m obsessed with Victorian literature, I need to move forward). Besides, there is an on-going TV series about this novel starring Hayley Atwell (it started last Sunday) and as I love her so much, I’m very motivated to finally read some E.M. Forster.

I read the first two books in the In Search of Lost Time series by Marcel Proust two years ago and absolutely adored them. Now, those books can be hard to read, because they’re made of very long sentences and most of the time, you don’t have any chapter to stop to (I hate stopping after a sentence and not having chapters, oops), which is why I’ve had that one on hold for more than a year. I have no idea where I stopped, so I’ll have to start all over again. I’m so excited to read Marcel Proust again and that one in particular, because it will follow the narrator in aristocratic and literary salons in 19th century Paris (!!).

*Le Côté de Guermantes for me, as I’m reading it in French

To the Lighthouse by Virginia Woolf (1927)

Virginia Woolf is one of those well-known authors I still haven’t read anything by. I’ve been meaning to read her books forever, but she intimidates me a lot, for she’s such an important literary figure! Mrs. Dalloway is probably her most popular one, but To the Lighthouse intrigues me a lot more. All I know is that it’s about a family and that it’s set on the isle of Skye. I don’t need anything more and I’m looking forward to finally discover this author.
Tender is the Night by F. Scott Fitzgerald (1933)
I am fascinated by the jazz age and yet, I haven’t read many books set during that time period. I read The Great Gatsby by F. Scott Fitzgerald years ago and really enjoyed it, but never got around to read any of his other books. A few weeks ago, I met up with a bookstagram friend at Shakespeare and Co. and we talked about the Roaring Twenties, the Diviners and Francis Scott Fitzgerald; she ended up buying one of his books and it has stayed on my mind ever since. I really want to read Tender is the Night because it’s his second most popular work and it’s a tragic romance set in the late 1920s on the French Riviera.
The House on the Strand by Daphne du Maurier (1969)
I couldn’t write a post about 20th century literature without mentioning Daphne du Maurier, could I? I’m so obsessed with her books, I want to read them all. While, as we speak, I still haven’t read Rebecca (because I saw the adaptation and still remember everything about it…), I read three of her books this year and absolutely loved them. The next one on my list is The House on the Strand, du Maurier’s take on time travel and I couldn’t be more excited because it is set in Cornwall (as always), involves a manor and the fourteenth century.
Lots of love,
Lucie