June is over, which means that we’re officially halfway through the year.

To celebrate that and reflect on the books I’ve already read since the beginning of the year, I decided to be very original and to do the mid-year freak out book tag, because I love this one so much! Did I really wait until July to post it? Why, yes.
Best book you’ve read so far in 2018
The Seven Husbands of Evelyn Hugo by Taylor Jenkins Reid. Oh, how happy I am to have read this book in June, because even when I wasn’t quite done with it yet, I knew it would be my answer. If you want to know how obsessed I am with this one, I wanted to reread it when I was a hundred pages in. It was such a thrilling and emotional novel, it broke my heart many times, introduced me to one of the most memorable characters ever with Evelyn Hugo and it made my little bisexual heart so happy.

Best sequel you’ve read so far in 2018
I haven’t had the best of luck with series since the beginning of the year. I did read first books in several series (the sequels aren’t out yet anyway), but picking up sequels has been hard, it might be because I’m in the mood for standalones, or sequels can often be disappointing (it depends, of course, but lately, I’ve been more disappointed than pleased). However, there are some exceptions to this rule, one of them being Shadowsong by S. Jae-Jones. This duology is so close to my heart, as so many elements of it are my absolute favourites (can you believe poppies are on the cover when they’re my favourite flowers?) and it was such an excellent and satisfying conclusion. I’ve been missing Liesl since January and I will never stop. I already want to reread these books so much.
New release you haven’t read yet, but want to.

There aren’t so many, actually, because I either got to my most anticipated releases already or they aren’t out yet. The three I can think of at the moment are A Thousand Perfect Notes by C.G. Drews, Circe by Madeline Miller, Sightwitch by Susan Dennard and To Kill a Kingdom by Alexandra Christo.
Most anticipated release for the second half of the year.
While I haven’t read many sequels since the beginning of the year, I’m excited for quite a few sequels for the second half of the year, as my most anticipated releases are Queen of Air and Darkness by Cassandra Clare and Muse of Nightmares by Laini Taylor. There are so many others of course, but those are the ones I’m the most excited for!

(Me on the day I’ll get my hands on those books)
Biggest disappointment.
Unfortunately, Villette by Charlotte Brontë. I have many reasons for not liking it and I know other readers or critiques have the same reasons for liking it, I guess it just wasn’t my cup of tea. I had really enjoyed the beginning, so I didn’t expect to dislike it so much, but it happens sometimes. However, I read Shirley by Charlotte Brontë and loved it, so I’ll just erase Villette from my memory.

I know this one was really hyped, but, Children of Blood and Bone by Tomi Adeyemi. I still can’t get over how much I adored this novel, need the sequel RIGHT NOW or how many things happened in just one book. I still can’t believe it’s a debut novel either. It’s one of the best fantasy novels I’ve read in the past few years. If you still haven’t read it, don’t think too much on it and go for it!

Favourite new author
Without any hesitation, Alice Oseman. I’ve read all of her books within a week, when I never do that. I can’t even binge-read book series anymore and yet, I needed more of her writing. I adore every single character she writes, her pop culture references (when I read that Frances from Radio Silence watched Parks and Recreation, I so screamed), seeing her characters making cameos in her other works (for Radio Silence). I’m so impressed by her, as she’s only two years older than me (!!) and she’s so talented. Moreover, I adore her YouTube channel where she talks about writing.

Newest fictional crush
PETER QUIIIIILL. I am pretty sure that everyone will give me a side-eye for that, thinking I’m only talking about MCU!Peter Quill. But I am so not. I love both comics!Peter Quill and MCU!Peter Quill and they have different backstories and storylines for some things! So as I’ve been reading the Guardians of the Galaxy comics for the past few months, I can legitimately say that he can technically be my newest book boyfriend. I’m pretty insufferable when I read them, though, because I scream a lot because of Peter. Oops.

Newest favourite character
Juliet Ashton from The Guernsey Literary and Potato Peel Pie Society, without any hesitation. When I reread my review of this book, I realised how obvious my answer would be, I seem so passionate about her:
“Juliet was such a great main character, especially when you consider that this book is set right after WW2, she speaks her own mind, is smart, sunny (if you’ve read the book you’ll appreciate that reference), independent, had great taste in books. I would have read another book about her and I’m even more excited to see her come to life on the big screen.”
I adore her so much and I knew I would from the second I read that she had written a biography about Anne Brontë, who is, incidentally, my favourite Brontë. Now that I’ve watched the movie, I love Juliet even more and it isn’t only due to the fact that she is portrayed by Lily James. I still have tears in my eyes from when they talked about Anne Brontë, I can’t.

Book that made you cry
Y’all, I cry in front of almost every movie I watch, I usually feel things too loudly, so I have probably cried while reading most of the books I’ve read so far this year. If I had to pick one, I’d say All of This Is True by Lygia Day Peñaflor. I adored this book so much and a part of it made me sob really hard, because it echoed my personal life perfectly. I cried for an hour after finishing it, that’s how it affected me. I’m so glad I read it, I so needed it.

Book that made you happy
The Language of Thorns by Leigh Bardugo. This book made me the happiest because it meant travelling back into the Grishaverse, which I’m always missing a little. Moreover, collection of short stories can sometimes be uneven, but it wasn’t the case with this one, I adored all of the stories. It was also made of fairy tales/folk tales and it gave me such a warm feeling while reading it, like I was a little child again, listening to a bedtime story.
Favourite book to film adaptation you saw this year
I’ve seen several book adaptations, now that I’m thinking about it, but my favourite was Love, Simon. I had loved the book and was so excited to finally see the characters on the big screen and I wasn’t disappointed in that. It is such an amazing and adorable story and it’s been meaning more and more to me lately, on a personal level. I also adored The Guernsey Literary and Potato Peel Pie Society, but I’d say that Love Simon follows its novel more closely!

Favourite review/post you’ve written this year
I found two versions of this question, so I’ll answer to both. My favourite review I wrote was for All of This is True by Lygia Day Peñaflor, it was such a thought-provoking book and I had so much to say about it. My favourite post I wrote would be the one about The Greatest Showman, where I explained why I couldn’t like this movie like so many people did. It was such a great post to write, because I had to do some historical research (can you tell I used to be a history major?) and I stood by everything I said, every single time (I had an argument about it at uni once, and I so won both the argument and a friend at the end of it).
Most beautiful book you’ve bought so far this year (or received)
It was a bit hard to pick, but while I tend to prefer paperbacks for reading, I have a weakness for what’s under hardbacks’ jackets. So, without hesitation, the most beautiful book I got since the beginning of the year is The Mermaid and Mrs. Hancock by Imogen Hermes Gowar. Honestly, look at how stunning it is:

It was really hard to pick just one and I’ve rarely cheated to those questions since the beginning of the tag, so I’ll show you my second favourite, because I can’t get over the naked hardback. Ladies and gentlemen, please feast your eyes upon The Cruel Prince by Holly Black: 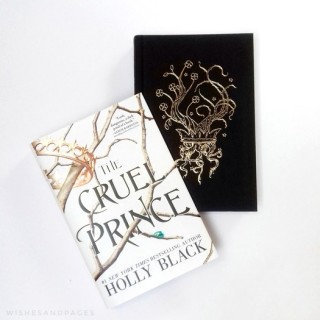 What books do you need to read by the end of the year?

There are so many of them, but here are the ones I want to read the most: Melmoth the Wanderer by Charles Robert Mathurin, Jonathan Strange and Mr Norrell by Susanna Clarke, Thomas Hardy: The Time
Torn Man by Claire Tomalin, Alias Grace by Margaret Atwood, The Master and Margarita by Mikhail Bulgakov, A Game of Thrones by George R.R. Martin (I was supposed to start reading them before the last season, but it’s almost been a year, oops) and The Luminaries by Eleanor Catton.
What are your three favourite books of the year so far?
(I’m trying to be nice by not saying your favourite haha)
Lots of love,
Lucie

One thought on “Mid-Year Freak Out Book Tag”